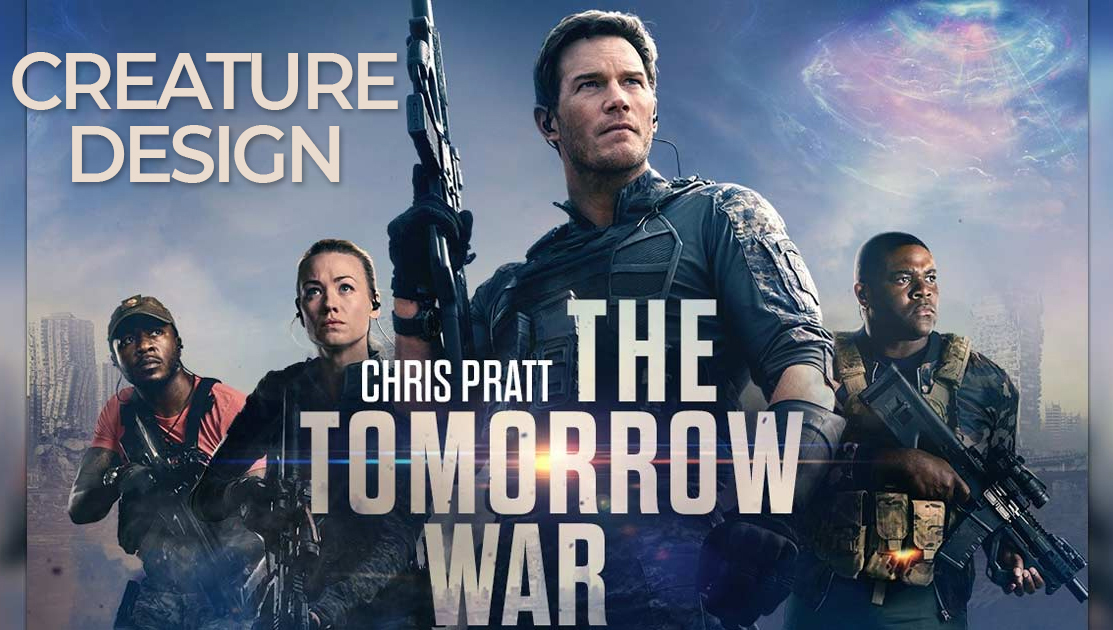 Ken Barthelmey has been making quite a name for himself as a creature designer for some of Hollywood’s biggest hit films, including IT, Pokémon Detective Pikachu, Godzilla vs Kong and most recently, Amazon’s The Tomorrow War starring Chris Pratt. Ken recently took the time to tell us all about his experience and how ZBrush helped him along in creating some of the most terrifying creatures imaginable! 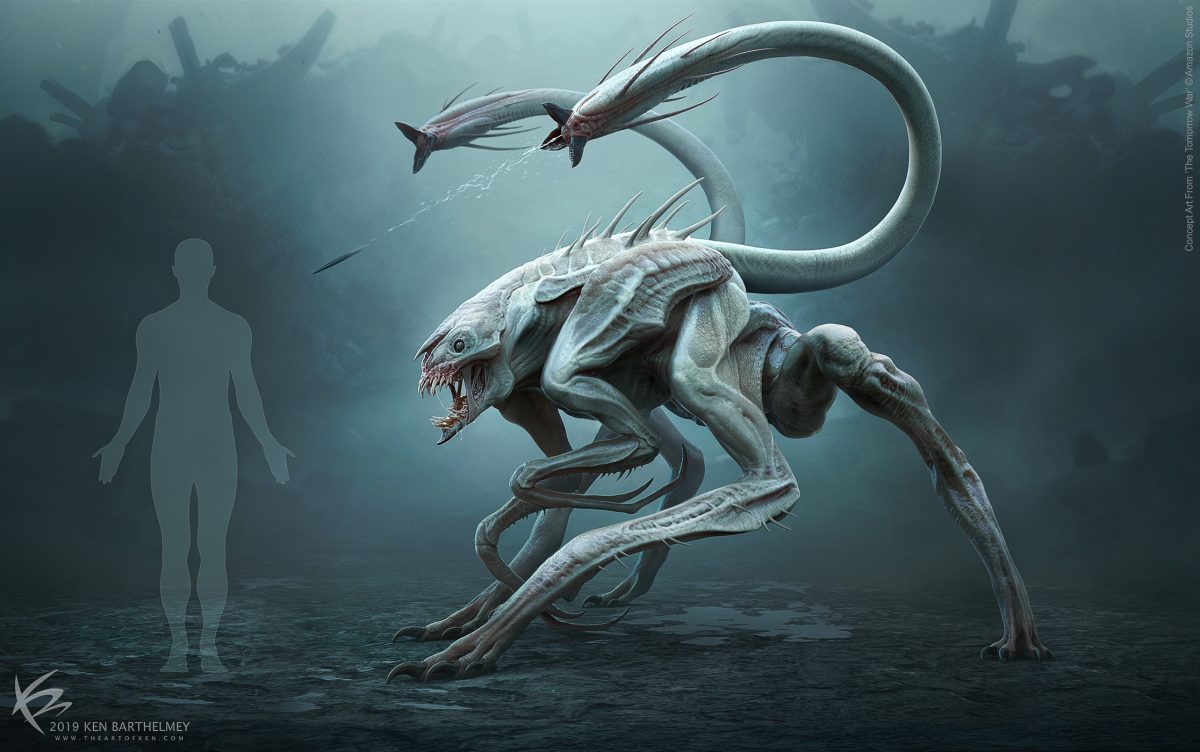 Can you tell us about yourself and your career as an artist?

I started drawing at a very early age and have always been passionate about art and all creative things in general. Particularly coming up with imaginary creatures gave me great joy.

My second love has always been movies. Films like Jurassic Park and Star Wars have been great inspirations for me and were big influences.

My first paid jobs were illustrating commissions for magazines and ads. These commissions were great learning experiences. Eventually I wanted to focus on my passion and I created a portfolio about creature and character design.

In 2012 director Wes Ball discovered my personal work and hired me to design the Grievers for ‘The Maze Runner’. It was my first big design job in the movie industry, I’m still very grateful to Wes for trusting me on such a big task and for giving me that opportunity. Other projects followed after that film. Since then I had the pleasure to contribute to a vast array of other films, including: ‘Fantastic Beasts 2’ (2018), ‘IT’ (2017), ‘Pokémon Detective Pikachu’ (2019), ‘Godzilla: King of the Monsters’ (2019) and ‘Godzilla vs Kong’’ (2021).

Working as a creature designer is basically a combination of all my interests. I enjoy the variety of the job, every project has new challenges and the opportunity to learn something new. I feel lucky to have a living from the work I’m passionate about, most of the time it doesn’t feel like work, more like a paid hobby. 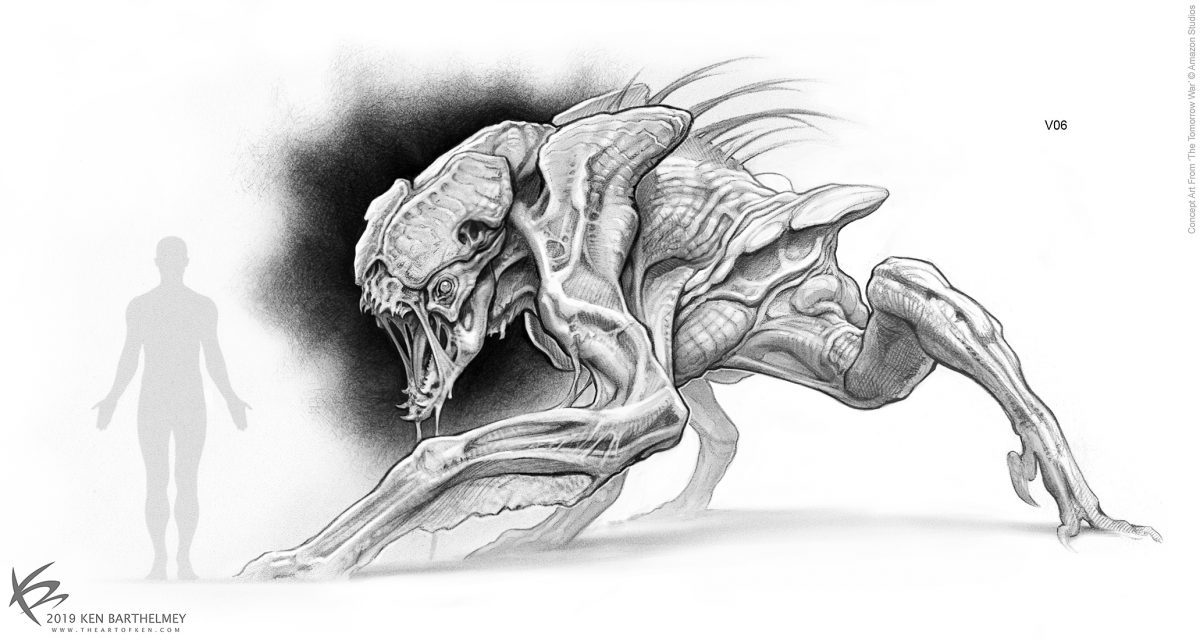 You most recently worked on The Tomorrow War, can you tell us about it and how you came to be involved in the project?

In early 2019 production designer Peter Wenham reached out to me to see my availability to design the aliens for an upcoming science fiction film starring Chris Pratt. Luckily I just had finished another project and I was able to start within a week. It was the perfect timing.

They explained to me that the aliens are a major part of the film and they wanted to collaborate with me to help define what the design is going to look like.

I love Science Fiction and I have a big passion for designing aliens in general. I was excited when I heard more details about the project and couldn’t wait to start working on the design. 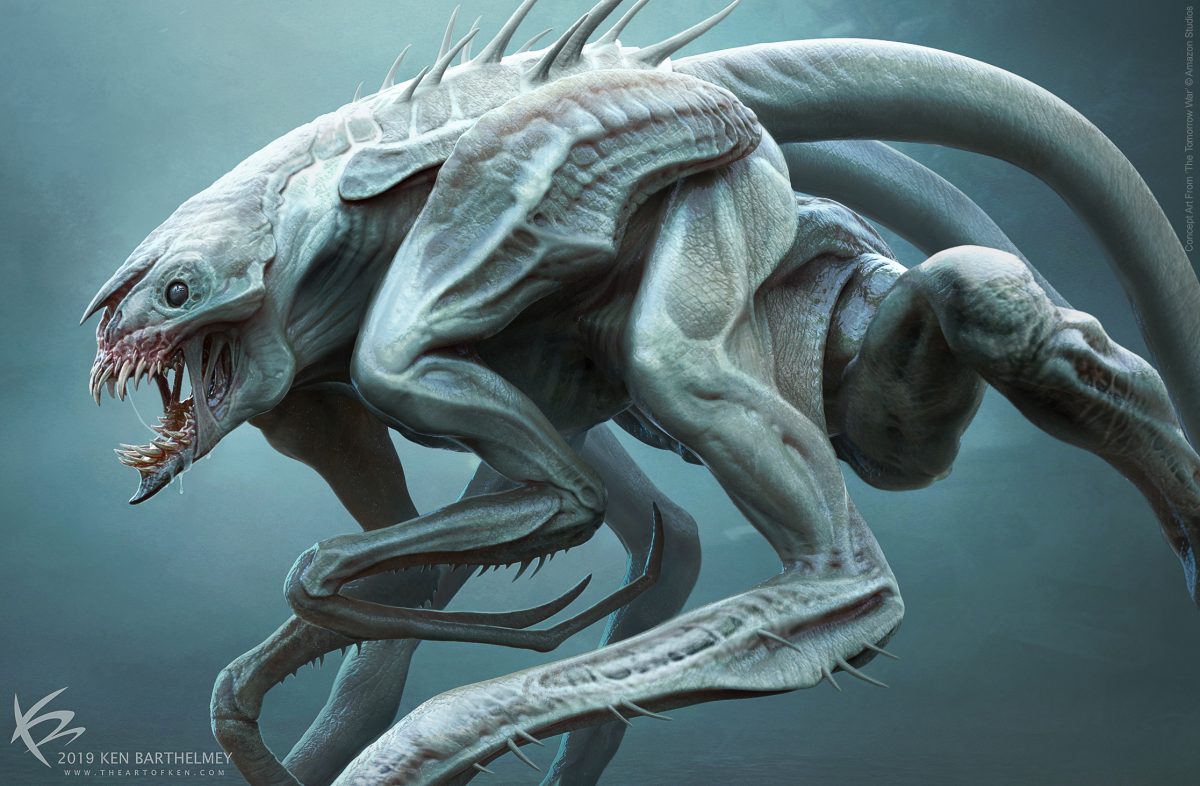 What assets did you contribute?

I was tasked to design the scary aliens called White Spikes for the film. The White Spikes were described to me as vicious creatures that attack and eat everything in sight. Director Chris McKay asked for a compelling design that conveyed the hunger and intelligence of these creatures.

Additionally, the aliens needed to have different abilities such as fast swimming and flying. It was important that they are agile and be able to move extremely fast. It was my job to translate all this information into one cohesive design.

In our Skype meetings Chris mentioned H.R. Giger’s Alien and Hellraiser as reference point but he also encouraged me to show him additional ideas. He liked the work he had seen on my website and wanted to see what I’d come up with.

Because there was no clear description of the White Spikes, I gave Chris a few different options to choose from in the beginning. In this early stage, it was all about brainstorming and coming up with interesting ideas.

In order to make them more threatening, Chris felt they needed to have some kind of an offensive weapon, and asked for a plausible way of how the White Spikes could shoot at their targets. I came up with the idea of spike-shooting-tentacles and pitched the idea in a sketch. Chris and everyone else loved that idea and wanted me to develop that particular design further. 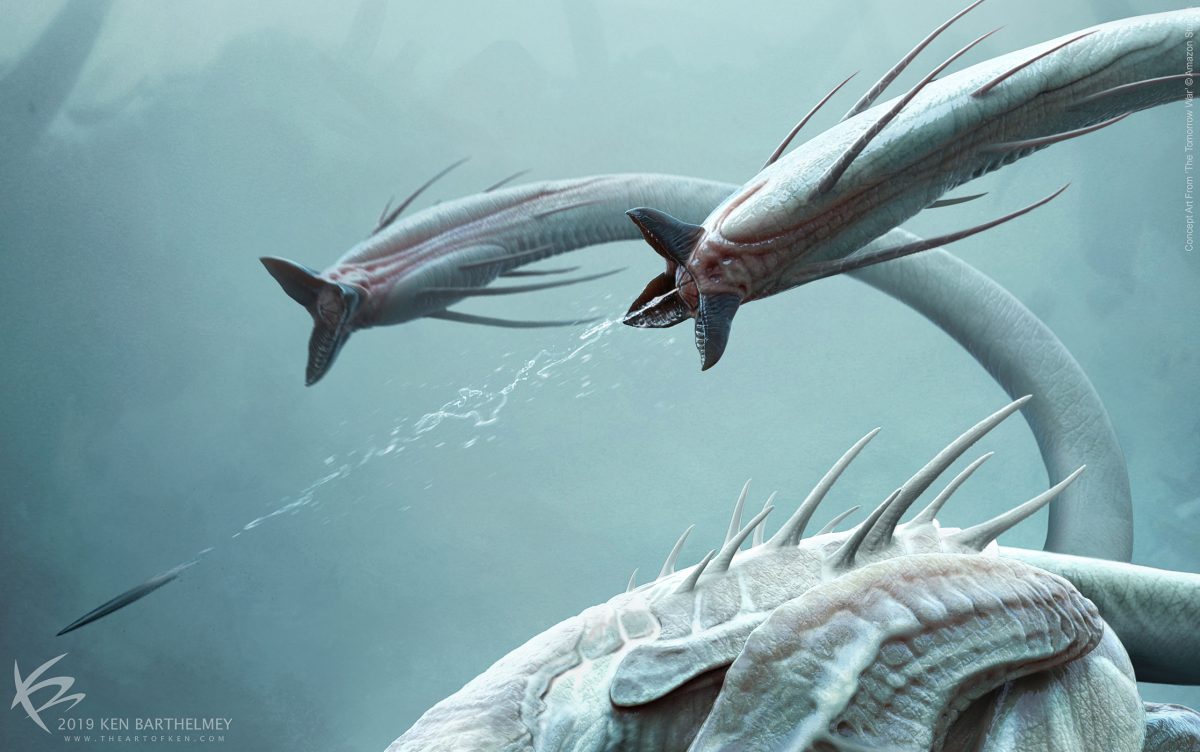 After that sketch got approved, I created a 3D model using ZBrush and did a few KeyShot renderings that were presented to the studio.

To my surprise, I was told at the very end that other designers (some I know and admire) already had worked separately on different alien designs, and ultimately it was my design that got picked for the film. 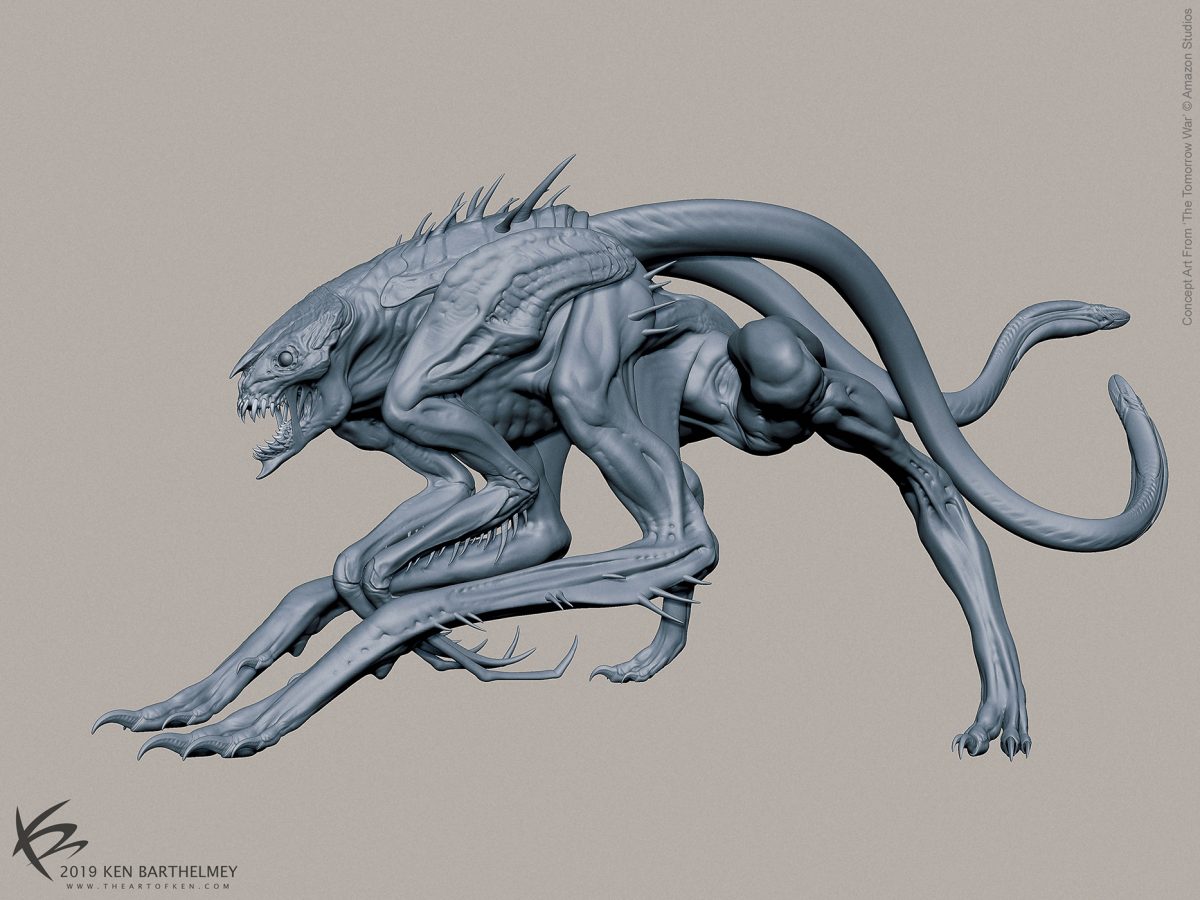 How long have you been using ZBrush?

I believe I first started using ZBrush in 2013. I love to paint and started as a 2D artist but I’ve always admired the artists who create this stunning 3D art and I wanted to do that as well. 3D seemed quite technical to me at first, additionally, learning a new program from scratch daunted me for a while. Eventually I started doodling around in ZBrush and I was pleasantly surprised how organic the workflow was.

Especially the use of Dynamesh was a revelation for me, it felt like sculpting with real clay. I fell in love with ZBrush and I used the program ever since.

Was it used for your work on the film? If so, how did it benefit you in your creation process?

ZBrush is a big part of my work process. The great thing about 3D is that you can’t cheat. I mean, sometimes what looks good in 2D won’t translate so well in 3D.

When I worked on the 3D model of the White Spike, for example, it was quickly obvious that the hind legs were too long and had to be modified. Things like that only become visible once you work in three dimensions.

Coming up with ideas is the hardest part of the job, but once a direction is set it’s pretty much refining the design until it gets approved by the director. Therefore when I work on a design, I always start with 2D drawings because it’s the fastest way for me to bring ideas on paper. After a sketch got approved I have a clear goal and I can focus on creating the 3D model, and develop the design further with ZBrush.

What features did you find beneficial?

Dynamesh is constantly in the use but I also like to use ZRemesher and Transpose Master for posing the model.

The most beneficial feature for me, while working on ‘The Tomorrow War’’, was the ‘ZBrush to KeyShot Bridge’.

Because of a planned meeting at the studio, I only had a few days to sculpt and render the White Spike. It was a tough deadline considering the complexity of the design, and exporting a model for rendering can be a very time-consuming process. But thanks to ZBrush to KeyShot Bridge I managed to finish everything on time and I was told afterwards that the studio loved my design.

What’s next for you?

I’m currently working on “Aquaman 2” directed by James Wan, which will be released next year. I’ve been working on this project for almost six months now and I’ve never designed so many different creatures and characters for a movie yet. I also contributed a few concepts to an upcoming Netflix film and for ‘’Thor: Love and Thunder’’.

Next I’ll try to do less client work to focus more on my personal projects.

Check our Ken on ZBrushCentral here! 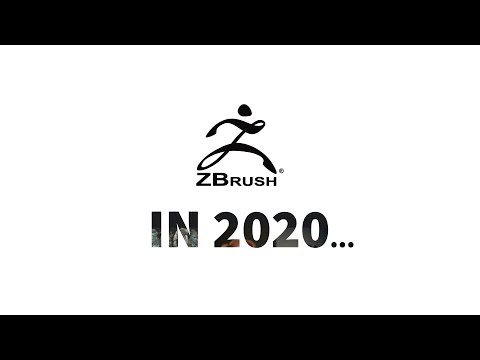 Have a Happy New Year!