For this demo I first started out in ZBrush 2018, and showed how to go about creating a creature using parts from other characters I have created in the past. I used a middle aged male scanned head, trying to show how you can create many different concepts from anything. I continued playing with the design and silhouette using the previous parts to figure out the creatures story. Concentrating on having the eye flow around the design and giving areas of rest, I slowly created the base form, before filling out the secondary details. After making sure I was happy with the direction, I explained a few ways to clean up your meshes, combine parts, and DynaMesh other areas to get a better structure to work from. I then showed FiberMesh and a few tricks to build, thicken, and move the hair around. I then filled in the high level details before bringing in alphas to flesh out the creatures skin and form. After sculpting, I went into poly-paint using a darker black/brown as a starting point, then brought in red and blues, and some textures to help fill out the creatures skin tone. After the PolyPainting process, I then brought the character into ZBrush 2019, going over the new NPR filters, folders, and cameras to create a more concept look for the final design. 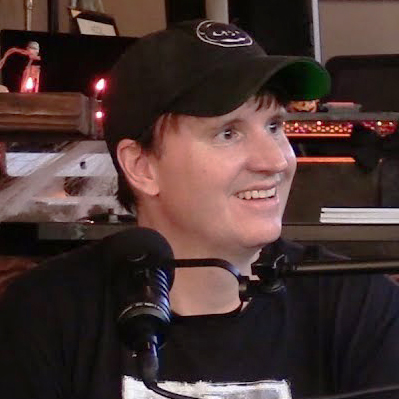 Creature Sculpting & Exploration of Forms More Scheduled Streams Coming Soon! Segment Summary: "I will be sculpting on created creatures and developing new forms and flow with silhouette in mind." Location: The Colony, Texas Hometown: Okemos, Michigan How Did You Discover ZBrush? "Watched Paul Gaboury do a demo back in 2005 and have been a fan of the program and Paul ever since!" Professional Experience: 30 years Most Used/Favorite Feature: "To hard to list just one, I would say all of them." Previous Works, Industry Experience & Highlights: "I have almost 20 years within the gaming industry, after coming from the traditional world of Disney. I have also partnered with James Cain and Maarten Verhoeven to create Grim (wearegrim.com), bringing our art to the collectibles market."